I just finished rereading Born to Lose: Memoirs of a Compulsive Gambler by Bill Lee. I was so compelled by his story that I was unable to put the book down after planning to read just a few pages. The next thing I knew it was 2:00 a.m.  Reading the book a second time was just as riveting. Bill Lee’s childhood—even before he was born—was filled with many jaw-dropping moments. He describes his descent into hell in a graphic and poignant way.

The book is the story of addiction told from the perspective of a male action gambler. Bill Lee was born in San Francisco’s Chinatown, where he was exposed at an early age to the gambling culture. The author speaks of early indoctrination and acceptance of gambling within his community.

“My history of gambling really began before I was born,” Lee says in the book. He was born into a culture in which it was not unheard of to lose fortunes and even one’s children to gambling. He talks about a generational influence as he was a third generation gambler. He believes that he is one of those unfortunate individuals who is predisposed to gambling and that all it took was exposure, and he was off and running.

Although he spent time in Vegas, the action primarily takes place in his hometown, but his story could have happened anywhere.  Gambling is about time, money and most importantly, availability.

He eventually finds recovery through the Twelve Step program and shares his challenges in accepting his disease and the structure of the Twelve Steps. At the time of the book’s writing, Lee had a 40-year history of gambling followed by 15 years of involvement with GA.

There is a ray of sunshine in reading the book as Lee shares his experience, strength and hope. He seems to have held off his demons one day at a time and credits GA. Before he surrendered to GA, he relapsed and questioned GA traditions and procedures, but in the end he came to praise the gift that he had been given.

Lee is a writer by profession and has been featured on several television shows. His memoir was published in 2005 by Hazelden Publishing, which “provides products and services to help people recognize, understand, and overcome addiction.”

Born to Lose is available in paperback and a Kindle version by following this link to Amazon. 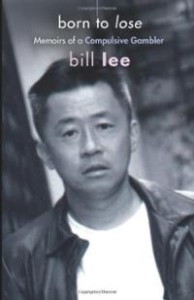