I just finished reading Marilyn Lancelot’s Gripped by Gambling, one of the first books written by a female gambler. This was my third reading, and the book was just as riveting as it was the first time. Marilyn is an incredible storyteller who chronicles her descent into addiction and the price she paid while held in its grip. She shares the struggles of a female gambler participating in recovery in a male-dominated “world” and reveals a portrait of a middle class grandmotherly type who could have been your next-door neighbor—except this neighbor has a secret: She is a gambler.

At the time the secret came to light, Marilyn had been involved in gambling almost from the time she arrived in Arizona 15 years earlier. What began as innocent fun in Laughlin became an obsession.

A Gambler or a Grandmother?

The embodiment of everyone’s grandmother, Marilyn didn’t fit the mold of the public’s perception of a cigar-smoking, overbearing, smooth-talking blowhard. Her gambling led to incarceration, and following this life-changing event, Marilyn relocated to the Phoenix area from Yuma. In search of a new beginning and help for her disease, she made the decision to attend Gamblers Anonymous where she had difficulty being accepted in a male-dominated recovery program. She persevered and eventually found acceptance within the group.

Recognizing that female gamblers presented some different issues as well as those that are unique to the female experience, Marilyn started one of the first women’s recovery groups in the United States. This first group was met with a lot of male opposition, but eventually the men were able to embrace the concept of “women preferred” groups. 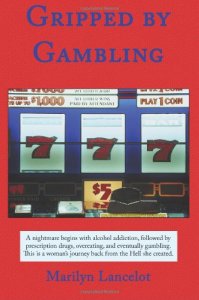 Recently I had an opportunity to talk with Marilyn about her experiences, and I asked her the following questions:

In your opinion has the public perception of gamblers changed for the better or has this perception remained the same?

Marilyn thinks that there’s now a little bit more understanding from the public, but she agreed that we have a long way to go to promote the concept of gambling as a disease.

You wrote this book almost 7 years ago. What changes, if any, have you witnessed within the recovery community?

Marilyn noted these changes: younger people are gambling, there’s more Internet gambling, the sheer number of meetings has greatly expanded throughout the state, and more people are accessing treatment. Also, Marilyn indicated that there are now more women’s groups and more understanding by male members as to why women’s preferred groups are needed.

Gripped by Gambling is the first of three books that Marilyn authored. Her latest book, Detour: Avoiding Temptations That Lead to Addiction, is now available on Amazon. Her other book is called Switching Addictions…Why Didn’t Someone Tell Me? All three books are available in paperback and Kindle format. All three books can be found on Amazon on Marilyn Lancelot’s Amazon author page.

Her proudest accomplishment is the newsletter “Women Helping Women.” She said that whenever she considers shutting down the newsletter, she receives a flurry of email from women all over the world. With its original articles written by Marilyn, addictions specialists, and other women in recovery, Marilyn’s newsletter is an especially vital link for women who may not have access to meetings or live in areas where meetings are scarce. In addition, “Women Helping Women” creates community for women all over the world.